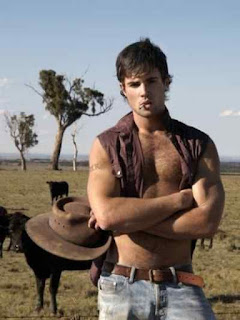 This week, I’d like to do a short story, which will be published in three parts. The title came to me first, and I built the story around the name. I once knew a man everyone called Gabacho to the point that I don’t even recall his legal name. He was tall, dirty-blond, and blue-eyed. Sort of like the protagonist of the story, except that I made him brown-haired. Apparently in Spain, Gabacho is a derogatory term for a Frenchman or European male. In Mexico, I believe it is a common term for an outsider, particularly a gringo.

At any rate, I hope you enjoy the story.

The instant my fleabitten gray gelding, Slick by name, stepped out of the waters of the Rio Grande onto Mexican soil, I ceased being Gary James Hawthorne and became Gabacho. I spoke enough of the lingo to know that was a common term for outsiders, especially gringos with brown hair and sky-blue eyes. And it didn’t take long for the point to come home. I was standing bare-assed naked while retrieving my clothing from a waterproof bag when a voice startled me.

I whirled to spot a slender figure sitting on a log. I’d assumed this was an unoccupied stretch. At first glance, I took it for a girl, but the voice was definitely masculine… a light baritone.

He rose and dusted the seat of his pants, a grin claiming his lips.

I held up the package. “Didn’t want my clothes to get wet.”

“Orale, you a good-looking dude. How come you swimming the rio, ‘stead of coming across a bridge? I look over there, I gonna see some badges shinin’ in the sun?”

As he drew closer, my confusion grew. Probably somewhere around twenty, his face was as pretty as any girl’s I’d ever seen. But the Adam’s apple and the broad shoulders gave lie to the features. This was a guy, all right. But damned if he wasn’t starting to get to me, especially when I saw where those dark chocolate eyes were looking.

“Nope. No badges. Just wanted to go for a swim.”

“You ain’t a killer or a thief or nothing?”

This kid didn’t have much of an accent. Sounded like anyone north of the river. Course, I knew a lot of the border Mexican kids managed to go to school in the States.

“Just a cowpoke looking for a change in the scenery. Heard the señoritas were friendly, so thought I’d give it a try.”

He nodded to my groin. “You know how to use that, they’ll be mucho friendly, no?”

I drew on a pair of shorts and stepped into my denims before I was as dry as I’d have liked. “I get your drift. Where am I, anyway?”

“You on the Rancho Salvador.”

“He nodded, his gaze now centered on my bare chest. “You got it.” He moved closer. “You don’t gotta get dressed on account of me.”

I leveled a look at him, probably not the one I intended because of his beautiful, tanned skin and full lips that looked like they could pout one minute and smile the next. A headful of dark curls didn’t help my concentration. I pulled my shirt over my shoulders and started buttoning it. “Yeah, I do. Otherwise you might regret it.”

I was right. His sweet smile instantly became a fetching pout. “Doubt that.”

“Who’re you?” I asked to get back on solid ground.

He drew to his full height, an inch or so shy of my six feet. “I am Carlos Pablo Salvador y Bachicha.”

“Salvador, huh? Any kin to the Salvador this ranch is named after?”

I shrugged my acceptance of his judgment. "Sorry if I’m trespassing. Show me the quickest way, and I’ll clear out.”

He threw a graceful hand toward the river. “Quickest way’s the way you come.”

“Tell you what. You come have a meal at the headquarters, and the foreman might have a job for you.”

“Fella by the name of Bartolome.”

“If you’re your daddy’s boy, how come you aren’t the foreman?”

An amused laugh bubbled up out of him. “I play at ranching. Bartolome, he works at it.”

“How come you just play at it?”

“Me, I’m an artist. Rather paint a horse than ride him. Good-looking gray you got there.”

He grabbed the reins of a handsome black gelding standing nearby. “Come on, I’m getting hungry. You’re invited.”

I was experiencing a few hunger pains of my own by the time we finally raised the ranch house. Willows and oaks, and pines threw shade over a rambling, two-story white house, an equally big barn, and a few supporting structures. A stunningly beautiful Appaloosa trotted into the corral and raised her haughty head to watch us approach.

“Carla don’t let nobody ride her. Not even papa.”

A woman strolled out of the house, a quirt in her hand, and raised an arm against the sun to look our direction.

“That’s Carla. Sometimes she acts like she’s la reina around here.” He laughed aloud. “Guess she is too, come to think on it.

Upon arriving at the corral, we dismounted, and my confusion deepened. Carlos came off the porch to meet us. Except it wasn’t Carlos. It was his female image minus the Adam’s apple and broad shoulders. They could have been twins. Hell, they probably were twins. And she provoked the same reaction in me, a stirring in the loins, a heightening interest.

We dismounted, and Carlos introduced us, a bit of amusement playing over his features.

“Carla, this is Gabacho, Gabacho, this is my sister, Carla.”

She reached out a gloved hand, and I bowed to plant a polite kiss on it. “Pleased to meet you, señorita.”

“Call me Carla,” she said. “Are you taking lunch with us?”

“I invited him,” Carlos said.

She turned back toward the veranda. “The dining room, not the cook house. Thirty minutes.”

We unsaddled and rubbed down our animals before setting them free to dip their long noses into convenient buckets of oats. After that, I washed up in a basin despite my recent bath in the Rio Grande.

A man joined us at the table. A stout, florid man introduced as Guillermo Juan Salvador y Ramos, the patron of the Salvador family. Two things stood out immediately about this impressive man. He was no fool, and he was not a man to be trifled with. Before that uncomfortable meal was over, he’d figuratively pinned me to the wall and knew everything about me, including the fact I’d fled the States about an hour ahead of the law on a beef arising from a brawl in a bar. It wasn’t the kind of charge that had a long life, so if I could stick it out south of the Rio Grande a few months, it would lose its luster. By the end of the luncheon, I had a job as a wrangler on the Rancho Salvador. Carlos gave me a sexy grin while Carla unleashed a pleased smile. Now all I had to do was figure out which one was giving me a hard-on.

I reconsidered. No, all I had to do was stay clear of both of them until I could go back home. Don Guillermo likely wouldn’t countenance the hired help taking either one of his offspring to bed.

Well, is that a set-up or not? Which way will the wind blow, I wonder. I don’t know because I haven’t finished the story yet.

Email ThisBlogThis!Share to TwitterShare to FacebookShare to Pinterest
Labels: Fleeing the law, Gay interest, Lust, South of the Border, The brother or the sister?