Next Up – Echoes of the Flute 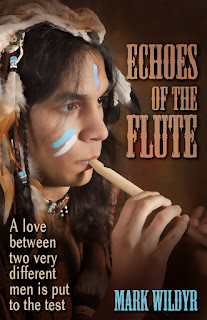 JM Snyder Books has published Cut Hand, River Otter, and Wastelakapi…Beloved, and is closing in on Echoes of the Flute. I completed my response to the first publisher’s edit, and am awaiting receipt of the second. After that, they move pretty quickly, so suspect it will become available in April. Then follows the reprint of Medicine Hair.

Last November, I gave you a look at Echoes, by posting a scene from Chapter 3 which featured the return of Matthew Brandt (Bear) to Teacher’s Mead from one of his prolonged jaunts. He finds his closest friend and spiritual brother, John Strobaw (War Eagle), swimming in the Yanube River. In the joy of their reunion Matthew makes a move on John, kissing him boldly. John, while yearning to accept the approach is uncertain, which Matthew takes as rejection. The chapter ends with Matthew storming away, and John, already regretting his loss, tells Matthew that if he goes away, never come back.

The scene below starts Chapter 4 as John recalls Matthew’s kiss and starts wondering….

ECHOES OF THE FLUTE

The incident at the river shook me right down to my heels. My response to Matthew—not to mention my reaction opposing him—left me doubting my horse sense. The lingering shadow of his lips on mine haunted me. I’d never been moved by a kiss like that before. Hell, I’d never been kissed before. That made me want to go find a girl while it was fresh on my mind…or on my lips. You know, to compare. But there weren’t any girls around except Rachel Ann and Hannah, and I wasn’t about to kiss my own sisters. Well, that wasn’t exactly true. Minnie Killpenny lived just a few miles up the river.

Then there was that other thing. I got hard remembering Matthew’s hand on my rod. I might be able to snatch a kiss from Minnie, but could I finagle her into groping me too?

There was no free time until the following Saturday. Then I hogged the bathing room until Rachel Ann banged on the door wanting in. I told her to go to one of the necessaries the coach passengers used. Squeaky clean, I plied pa’s straight edge to my sideburns and to take out a couple of whiskers on my chin. His razor always had a keen edge because it didn’t get much use. None of the men in our family had facial hair worth mentioning.

I pointed Arrow’s nose north instead of heading upriver. Pa’d told me Matthew had set up camp on the north side of the hills along Strobaw’s Crick. Nobody’d seen or heard from him since he went steaming away from the swimming hole. I found him all right. His camp, at least. He’d rigged up a tent…it wasn’t quite a tipi…and his things were still stowed inside. There was no sign of him or Wind Rider. His tracks led up the creek, but it looked like he was out hunting, so I gave up and headed for my real destination.

I’d wasted a good bath by the time the four miles to the Killpenny Farm were behind me. I was sweaty from the sun and kinda smelled like Arrow Wind. At least, it seemed that way to me. What kind of reception would the Killpennys give me after Matthew’s stunt last year?

The farmer made me welcome and took time to sit on the front porch of his place with me and have a drink of water. He offered spirits, but despite craving some to bolster my intent to kiss his daughter, I declined.

Mr. and Mrs. Killpenny were plain folks, but their fry came out fairer than their parents. Esau was twenty and my height, about five-ten, but he outweighed me by twenty pounds. Wasn’t chubby, he just carried his weight solidly. Blue-eyed, he was pleasant to look at and friendly, especially if you’d talk hunting with him.

Minnie—she let it be known she liked to be called Min—was easy to look at. Ma was fond of saying, “that Killpenny girl wasn’t but seventeen and looked to be twenty.” She was blonde, like her brother, but her eyes were green. Pretty as all get out. But shy. How in the hell had Matthew gotten her out in the trees last year?

The Killpennys must have been wondering that, as well, because they stuck real close while Min and I sat on the porch and talked. At least, I talked. She just did a lot of smiling and dimpling. Esau hung around until I showed no signs of going hunting with him, and then he took off. As he strode around the side of the cabin, I noticed his bottom was broader than Matthew’s. Now where in the hell had that come from?

After an hour, I figured I’d worn out my welcome, so I said goodbye to everyone and went to get Arrow. I’d ground hitched him, but he’d wandered a bit, following the vegetation as he grazed. He was around behind the barn, and when I walked over to get him, Min came along with me. As soon as we were out of sight of the house, I grabbed her. She must have thought a wild Indian was attacking her, but she didn’t do anything except give a grunt when I jerked her up against me and planted my lips on hers. Had to… or I’d have lost my nerve. After about thirty seconds, I came up for air, muttered something—not sure what—and vaulted aboard Arrow. I remembered to doff my hat before laying heels to the horse’s flanks and racing away.

Half a mile later, I reined my gelding to a walk and considered things. Wasn’t sure if I’d reached any conclusions, but one thing was for sure. The two kisses didn’t even compare. Min’s was soft and sweet…and kinda like kissing my sisters. Matthew’s had reached right down inside me and yanked on my innards.

Instead of going back to the Mead, I headed for Matthew’s camp again. But it wasn’t there anymore. The spot where his tent had been was pristine. The earth had been wiped clear of any sign he’d ever been there. He’d come back and seen my tracks and wanted no part of me. I must have hurt him awful bad that day at the swimming hole.

I could have ridden in a big circle and picked up his trail, but this made it plain he was through with me. Arrow turned down the crick and bore me home with the hole Matthew always left in my chest back in place—except bigger this time.

Hope this sparked your interest and motivates you to want more. The publisher has settled on a new cover, but I’m unable to locate the new one, so have provided the previous cover.

By the way, if any of you have read Wastelakapi, please post a review with Amazon and give me some stars. All the previously published books have multiple readers’ reviews, but poor Wastelakapi sits there with no reviews and, alas, no stars.