Gabacho Moves On (Part One of Two Parts) 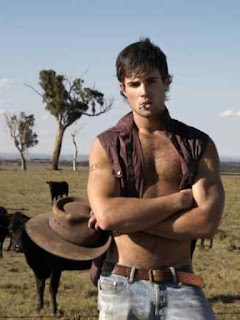 By popular demand, Gabacho returns to the post this week. Apparently, some of you hombres liked the kid. So here we go.

Perched atop the flea-bitten gray I called Slick, I worked my way west toward the Antelope Springs border crossing. I’d arrived in Mexico naked and dripping wet after swimming the Rio Grande, but I wasn’t of a mind to go back stateside that way. It woulda been quicker, but quick wasn’t the thing at the moment. I was seeing new countryside, finding work when I could at a ranch here or a bar there to keep from spending the last of my pay from Rancho Salvador. I speak the lingo pretty good, so there wasn’t a problem from that standpoint. Fording the river the way I did, I didn’t have papers, but the border guards hadn’t been requiring them all that long, so I wasn’t worried on that score.

Slick and I were headed west again after an overnight stay in a little no-name village, and along about evening time, I spotted what looked to be a campfire a little to the north of me as the long shadows began stretching out the evening. I’d had pretty good luck at finding welcome at such spots, so I turned my pony down the dusty trail toward the flames. I made plenty of noise, “halloin’” the camp well before I got there. A welcoming noise rose, so I continued until Slick was standing in plain sight of the fire’s glow.

“Hola,” I said, nodding in the twilight.

“Hola, Gabacho,” came two or three answering voices. Sometimes it seemed like I was never a stranger because I was always hailed as gringo or Gabacho. Gringo if they weren’t too careful about being polite, and Gabacho if they were. That was a tag they hung on Anglos, especially ones that were fair. My curly brown hair with honey highlights and blue eyes qualified, apparently. I’ve introduced myself to people with my own name, Gary Hawthorne only to be told “No, I was Gabacho.” So I quit offering my legal handle and simply answered to that.

“Evening,” I responded. Sitting horseback until invited to dismount. Once it came, I saw to Slick’s needs, ground hitching him near a small stream where there was plenty of grass. I heard grunts of approval as I rubbed him down before approaching the three men.

They turned out to be drovers for a ranch with the improbable name of Rancho Punta de Flecha… the Arrowhead Ranch. They offered coffee and beans and tortillas, which came in handy at the moment. I hadn’t had anything all day except for some jerky from my saddlebag.

They were an amiable group, and we were soon comfortable with one another. They quickly wormed out of me that I’d spent several months on Rancho Salvador and had good things to say about how the place was run. It seems the ranch, and especially its long-time foreman Bartolome Barca, ranked high in this part of Mexico. It took a good quarter of an hour to discern there were actually four of them. One fellow sat deeper in the gloom, somewhat removed from the fire’s glow. I caught the gleam of his eyes before I actually saw him, giving me something of a start.

“Don’t worry about Don Tomas,” said the one called Juan, who did most of the talking for the group. “He don’t say much, but he hears everything.”

With that criptic remark, Juan returned to talking about Texas longhorns. But a little later, I heard the low rumble of a voice from the darkness.

Juan waved a hand in the air. “Just Don Tomas. He’s got one a them little teléphonos he carries around with him. Always talking on it.”

“You called him Don Tomas, not Tomas.”

Juan dropped his voice and leaned toward me. “He’s the patrón’s son. He rides with us sometimes. Ain’t a bad vaquero.” Juan wagged a hand back and forth. “But you know, he ain’t one of us. Don’t join in with us much.” He tossed the rest of his coffee on the fire. “Welcome to stay the night. Any old piece of ground will do.”

“Thanks, I’ll take you up on that. But I need to wash up. I been traveling all day.”

Juan nodded over my shoulder. “Back down there about ten meters, they’s a pool. Welcome to use it. Mite chilly, but it’s good water. And the snakes has already gone to bed.” He laughed at his humor and started making ready to turn into his blankets.

I collected Slick and wandered down the creek until I found the pool Juan had been talking about. After ground hitching the pony, I sat down on a rock to slip off my boots. Then I stood and shucked every stitch to slip into the cold water and scrub away the day’s grime. I’d finished my task and was wading back to the shore when a dim outline of someone sitting cross legged on the bank startled me. I saw moonlight catch in the eyes and knew who he was before he spoke.

“You as good looking as Carlos said you were.”

“Carlos? Carlos Salvador? How do you know Carlos?”

“From school. I guess I met you the same way Carlos did. Buck naked coming up out of the water.”

I chuckled. “Guess so. I swam the Rio del Norte and came out on the bank where he was.”

I licked my lips. Was Carlos blabbing about what we’d done the day I left the Rancho? I tried to put another spin on it. “I can hold my own with most of the vaqueros.”

“Yeah, he says you’re a good cowhand, but you’re better at something else.”

He rose from the ground and moved closer. A warm hand cradled my testicles. “Like screwing. He says you turned him every way but loose.”

I brushed away his hand but didn’t take offense. “What is it with you hidalgos. You all talk English better’n I do.”

His hands cupped my buttocks and pulled me into him. In truth, his warm touch was welcome. The night was chilled, and I was wet. I pushed him away and picked up the towel I’d laid out from my bag.

He took it from me. “I’ll do that.” It wasn’t a question; it was a statement. So help me, I let him. He dried me—all of me—very thoroughly and got me aroused while doing it. I finally found my voice.

“Hey man, we’re standing out here in front of God and everybody.”

“I don’t know about God, but everybody—all three of them—have turned in over in that grove. Nobody can see us here.”

When I didn’t answer, he dropped to his knees and clasped me around the waist. I lost the will to protest when his tongue went to work. Half an hour later, he lay beneath me trying to muffle his grunts of pleasure as I pounded his trim butt. Carlos and his big mouth had given me a reputation to live up to, and I damned near got a hernia meeting expectations. But when Tomas gathered his clothes later and staggered off to his own blankets, he looked as if he was walking on rubber legs. Pleased, I cleaned myself up, and dropped into the bedroll to sleep away the rest of the night.

When I woke the next morning, the others had moved on, leaving behind a small pot of chili and beans. After last night’s workout, the repast was welcome. Finished with my breakfast, I pulled on my britches and boots, and donned the vest I customarily wear to protect my back from the sun. I seldom bothered with a shirt.

Slick seemed ready to travel, so I slapped leather on him, mounted up, and did just that… traveled.

So Gabacho’s on the move, returning—sooner or later—to the States. For a womanizer, he’s been getting a lot of male flesh lately. Wonder if that bothers him? Maybe we’ll find out next time.