DreamSpinner Press recently advised that the official publication date for JOHNNY TWO-GUNS is March 18, 2016. This book will take its place beside THE VICTOR AND THE VANQUISED and CHARLIE BLACKBEAR as Mark Wildyr’s next book with a contemporary setting. Working with DreamSpinner in preparing for this day has been a real pleasure. I particularly like the cover art for the novel. The artists loaded it with symbolism from the book. Johnny, himself, a horse, and a highway scene. All of these play an important part in the story, as does the silver and turquoise ring you can see on his finger Kudos to the staff.

Said cover and the Prologue of the book are provided as this month’s post. Enjoy.
***** 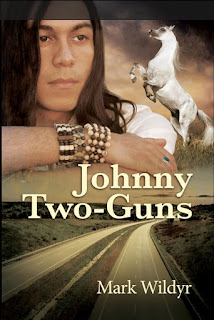 PROLOGUE
The Bitterroot Range rose above the tops of the evergreen forest surrounding the ramshackle, tin-roofed house. A wiry young man strode out the back door and tripped down a set of three steps. His father, walking with a decided limp, followed along behind. An old woman caught the screen before it slammed shut and watched the two head for the corral. Her throat nearly closed up on her as she perceived something different in the manly grace of her grandson. She was worried about the boy – and he was a boy to her way of thinking. A deep frown marred the natural dignity of her features. Likely it was this other thing from the outside world bothering her. Her lips moved in an ancient Chippewa prayer, muttered in the mother tongue.
“You be careful with this bronc,” the father said. “He’s a bad one.”
The younger man spoke in a clear baritone. “Mean, maybe, but I see good horseflesh under those rollers he’s blowing. He’ll make a good working horse one of these days.”
The father switched a strip of leather to his other hand. They’d use the device to blind the unruly buckskin while they put leather on him. “Likely, but there’s lotsa outlaw to leech outa him before that comes along. You ain’t rodeoing, so don’t be shy about pulling leather. And don’t let your mind get carried off by that other stuff.”
“That other stuff looks like a way to bring in some good money.”
A thundercloud hid in the look the older man shot his son. “We doing all right. You got a roof and a meal and clothes on your back. What else you need? Besides, you bring in extra for breaking mustangs.”
The younger man’s mouth tightened, but he held his tongue.
They worked for twenty minutes just to put tack gear on the cold-backed animal. This one would fight the gear every day of his life. The father held on to the bronc’s flaring nostrils and twisted fingers in one of the animal’s ears while the youth wrangled a light saddle into place.
As soon as the rider swung onto his back, the buckskin went up on his hind legs and came down hard. He tried out some stiff-legged crow hops before turning loose. The horse spun and sun-fished his muscled body in a graceful arc before swapping ends – going up one way and coming down facing the other direction. His bucks were arm jerkers, powerful.
The youth looked to be glued to the horse’s back. Taking his father’s advice, he held onto the saddle horn during the worst of the leaps. If the blessed mustang would just tire out before he did, he’d have it made. And tomorrow, the pony wouldn’t fight so hard. And the next day …
They must have been going at it for thirty minutes before the horse stumbled.

*****
While I thoroughly enjoy wallowing in 19th Century historical background of the Cut Hand Series, I do like to set foot in the modern world on occasion. JOHNNY TWO-GUNS is one of these forays. Let me know what you think.

Thanks for reading, and come back soon.